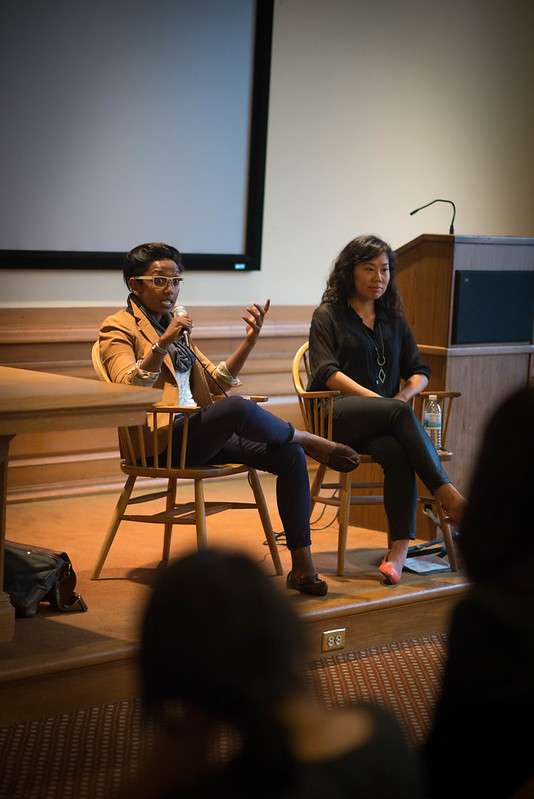 Berkeley Connect in English recently hosted “Professors in Dialogue” with new English professors Poulomi Saha and Dora Zhang. The event was a rare opportunity for students to hear about the process of becoming an English professor, and the struggles and joys that come with it. When a student asked how they became professors, Saha answered, “Sheer or dumb luck. I kind of fell into it.”

Originally on a different academic path, Saha cited the experience of writing her undergraduate thesis—as well as influential mentors she had along the way—for changing her trajectory. Zhang, on the other hand, always loved reading and writing, but she also attributed her career choice to chance.

Zhang expressed her love for literature, saying, “Literature is a place where you can wrestle with great life questions.” For her, a novel by Marcel Proust that she read in an undergraduate class was a game-changer, and ultimately influenced her to pursue an academic career.  Saha, on the other hand, cited Freud’s “Mourning and Melancholia” as the book that made her a professor.

Both professors described the difficult job market for PhDs in English, cautioning students that graduate school should not be their automatic next step; as Zhang said, “Don’t make grad school your default.” They advised that making the decision to go to graduate school should be based on a clear understanding of the job prospects in English, as well as on the funding package a graduate program is offering:  never enter a program in which you are not fully funded.  Most of all, said Zhang, be sure you really, really want to go to graduate school.  Landing a job as a professor is incredibly difficult, so Zhang and Saha advise against building your entire identity around the idea that you want to be an academic.  As Zhang suggests, “Try to disinvest your personal identity and self-worth from what kind of program you get into or what kind of job you get.”

Attempting to change to a lighter subject, a student asked the professors about their best experiences teaching at Berkeley so far. Saha described her love of teaching as well as her colleagues here, adding, “It’s a place that’s incredibly alive with thinking.” Zhang expressed her gratitude for being at a public institution, as she attended graduate school at Princeton University and found the private school atmosphere a bit stifling. She said, “Berkeley feels so much more real, as opposed to feeling like I was living in a bubble.” Zhang also talked about how impressed she was with her students, and how smart and willing to take risks they are.

The conversation then shifted to talking about the undergraduate experience. Saha said wistfully, “If I could, I would totally go back to undergrad.” Both professors spoke of their appreciation for the astounding range of courses available to undergraduate students, with few limitations on what students can take. They explained how the pressure in grad school for everything you learn to specifically help you in your career path is much less of an issue as an undergrad. “As an undergrad, you’re more open to confusion, and you’re not always worrying about being a master,” said Zhang. “It allows you to learn so much more.”

With the wise words of the two young English professors floating around in their heads, students left the room in Wheeler thinking about their futures. Most importantly, however, they left feeling encouraged to make the most of their valuable time now as undergraduates at the number one public university in the world.