Erica Bree Rosenblum is an Associate Professor of Global Change Biology at UC Berkeley in the Department of Environmental Science, Policy and Management. She received her B.A. from Brown University and her PhD from UC Berkeley. Bree’s research focuses on understanding the biological diversity of our planet. How are new species formed? And why species being lost at such an alarming rate in our contemporary world? Her research crosses scales from genes to ecosystems, and takes place from the White Sands desert in New Mexico where new lizard species are evolving, to the rainforests of Africa and South America where amphibians are threatened with extinction. Bree’s work has been recognized by numerous awards and has been featured in the New York Times, the Discovery Channel and many textbooks. Bree loves to share her inspiration for studying life on our changing planet and runs regular outreach events for students of all ages. She has been involved with Berkeley Connect since 2013, became Director in 2018, and is passionate about constantly deepening the commitment to mentoring and community building at UC Berkeley. In 2020 she was named faculty director of the Berkeley Discovery Initiative. 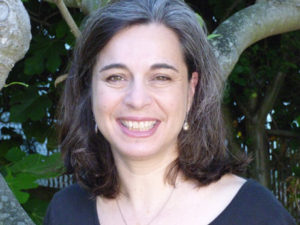 Michele Rabkin joined Berkeley Connect as its first Associate Director in 2013. Previously she served as the first Associate Director of the Arts Research Center at UC Berkeley (and its predecessor, the Consortium for the Arts). She has held leadership positions on the Chancellor’s Staff Advisory Committee, the Chancellor’s Advisory Committee on Work & Family, the Equity & Inclusion Implementation Team in the Division of Undergraduate Education, and the Dismantling Racism Study & Action Group, and is a volunteer facilitator with the Multicultural Education Program. She has a BA from San Francisco State University and an MFA in Visual Arts from UC San Diego.

Maura Nolan, Associate Professor of English, was the founding Director of Berkeley Connect (2010-2018).  In 2011, she received the Berkeley Faculty Award for Outstanding Mentorship of Graduate Students for her leadership of the Chernin Program, the pilot project in the Department of English that launched the campus-wide Berkeley Connect program.